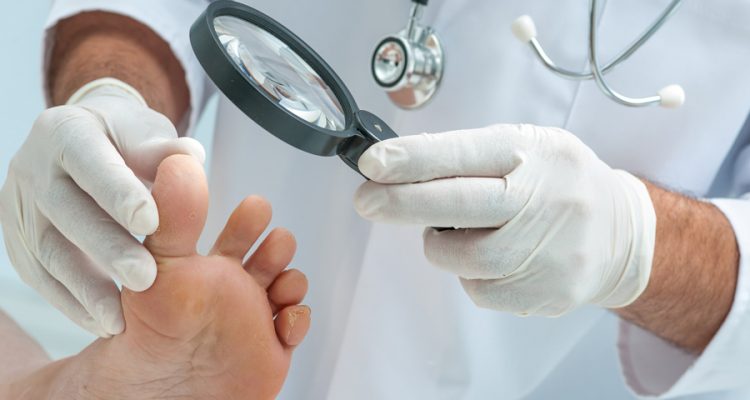 Onychogryphosis also known as “ram’s horn nails,” is a condition in which the toenails become thickened and the curve of the nails becomes more severe, making them difficult to cut and causing them to grow into a long, curved shape resembling a ram’s horn. The difficulty of trimming the nail is often exacerbated by neglect—one of the very things that sometimes brings the condition about in the first place. For this reason, the elderly are especially prone to onychogryphosis.

Symptoms of Onychogryphosis
To say that the toenail “thickens” does not adequately describe the more severe cases of this condition. In some of these cases the toenail indeed looks more like a horn than a nail; it is yellowish-brown in colour, and no longer flat, so trimming it with nail clippers or scissors is out of the question.

Causes of Onychogryphosis
The most common cause of this kind of nail growth is believed to be chronic neglect. Elderly people in particular can sometimes become absent-minded and indifferent to their health, causing them to become less conscientious about trimming their nails. (In some cases the task of nail trimming may become difficult for us as we get older, due to conditions such as arthritis.)

Another possible cause of onychogryphosis is pressure on the nail over an extended period, such as may be caused by poorly fitted shoes. This pressure causes the toenail to grow unevenly; one side of the nail grows faster than the other.

Other suspected causes of onychogryphosis include:
• Trauma, such as a blunt-force injury to the toe or a laceration that damages the nail matrix
• Peripheral Vascular Disease
• Psoriasis
• Syphilis
• Ichthyosis, a skin condition that cause the skin to become dry, cracked, and easily damaged
• Fungal infection

Complications of Onychogryphosis
If onychogryphosis is left untreated, the nail can eventually grow into the skin, causing pain and inflammation, and creating a risk of bacterial infection. Even if this does not happen, the unchecked growth of the nail can create an environment in which toenail fungus and other sorts of infections can appear.

Surgical removal of the toenail (also known as avulsion of the nail plate) is a common treatment for onychogryphosis, and in some cases your podiatrist may even recommend a permanent nail removal, which is accomplished by destroying the nail matrix. (The nail matrix is the layer of cells at the root of the nail responsible for producing keratin, the material the nail is made of. In other words, the matrix creates the nail and causes it to grow.)

The procedure for removing a toenail is simple—the podiatrist injects a local anesthetic into your toe and simply removes the nail. Following the removal of the nail plate, the next step may be the destruction of the nail matrix. This may be necessary if the condition is so severe (or has gone untreated for so long) that the nail matrix has been scarred and this scarring has permanently altered its orientation, making it impossible for the nail to ever grow properly again. A nail that is allowed to grow from a matrix that has been damaged in this way will continue to thicken as before and may not adhere properly to the nail bed.

If your podiatrist has determined that it is necessary to destroy the nail matrix after removing your toenail, he or she will coat the matrix with a chemical agent. This procedure is known as a partial or full matrixectomy, or permanent nail removal.